Back and Better Than Ever

Emmaline Berg has been competing in track & field since she was a freshman in high school. She initially became interested in the sport at a track & field camp the summer before, where the high school coach invited her to join the team. She lettered in track all four years and went on to be recruited to throw for Dartmouth College. In college she threw Hammer (personal record 49.70 meter), the Discus (P.R. 46.23m), and the Shot Put (P.R. 15.19m), and now specializes solely in the Shot Put. She graduated from Dartmouth in 2014, and has now set her sights on her next goal, the Olympics.

“I decided to continue competing because I was not satisfied with just ‘being done’. I felt like I had so much more potential that I could continue to improve upon. My goal, ever since high school, was to compete at USA’s and, ultimately, the Olympics. I knew I had the self-motivation to be able to work on my own after I graduated, so I wanted to see how much I could accomplish!”

Emmaline, like most elite athletes, is no stranger to injury. An ACL blow out in the fall of 2010 prompted her to take a year off from college to focus on surgery and rehab. She came in to our clinic in February with knee pain that had been persisting for a couple of months.

“Every once in a while it would act up and cause some pain and discomfort,” 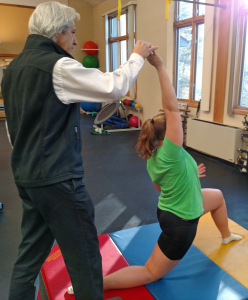 Emmaline reported. “This time it just wouldn’t get better. So a friend finally convinced me to go see Bill at Cioffredi & Associates.”

Bill found that she had select areas of muscle tightness and relative weakness which resulted in her right lower extremity being out of biomechanical balance.
“It turns out I had some chronic physiological problems that were causing my recurring discomfort, including a tilted kneecap and severely diminished VMO (Vastus Medialis Oblique, the muscle just above and to the inside of the knee cap) that had torqued my leg, knee, hip and torso inappropriately.”

In general, when biomechanical stresses persist or go beyond the body’s capacity to adapt, abnormal movement patterns arise, and symptoms can begin to express themselves.

“Bill immediately evaluated my problem and gave me piece of mind that there was nothing torn or permanently damaged. He also completely understood my needs and demanding lifestyle as an elite competitive athlete and worked with both me and my coach to find ways to help me without having to stop training completely, which was HUGE for me!”
For Emmaline, throwing the shot put requires her maximum power from pushing off of her right leg. By resolving her biomechanical abnormalities she was not only able to resolve the pain, but it increased her ability to generate power through her leg.

When asked what advice she would give other athletes that are rehabbing from injury, Emmaline said:

“Keep the mindset of trying to be BETTER than you were before you got injured. Set goals – both small and large. Ones you can reach in a week, and ones for when you are back to 100%. I know I was given the opportunity to reshape my muscles and train them into healthier, stronger positions – so I DID end up way stronger than I was before my injury. You have to find the GOOD in your bad situation, and focus on that! ALSO – REHAB REHAB REHAB!! You need to be self-motivated and really take those exercises seriously so you can be better than before. What I am now learning is to keep doing those exercises as long as you are still an athlete – it will keep you healthy!”