Getting Back to Their Passions

A Mother & Daughter’s Journey to be Pain Free 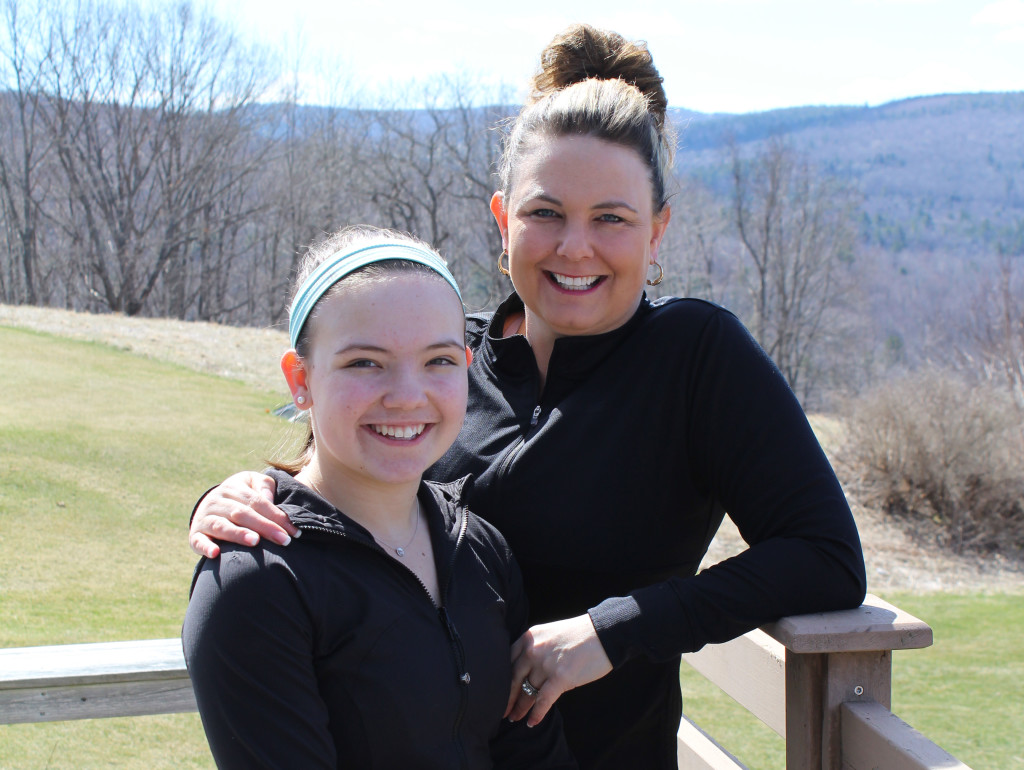 Anna and Ella Dulac are an active, mother-daughter duo. Anna, in addition to her daytime teaching job, is a long standing fitness instructor, skier, and half-marathon runner. Ella is a competitive gymnast and all around dynamic teenager. This winter, both Anna and Ella found themselves at Cioffredi & Associates. Moreover, they both ended up working with the same Physical Therapist; owner and founder Bill Cioffredi, PT.

“Ella has been a gymnast since she was about 5 years old,” says her mother Anna. “She gradually moved up the levels over the years, but along the way the tumbling, jumping, hard landings, and competitions took their toll.” This past fall, with the increased amount of complexity in her jumping, she started to have a shooting pain in her ankle.

After numerous doctors’ appointments Ella grew frustrated. “I tried many things like icing, wearing a boot, going on crutches, and just resting it,” recalls Ella. “After all this my Doctor told me to look into physical therapy.”

Anna remembers that at the time the biggest frustration for Ella was that as a determined and dedicated athlete, no one could tell her exactly what was wrong, and how precisely to fix it. “After the MRI, being placed in a boot, and months of being held from any training or competing we brought Ella to see Bill Cioffredi. I had heard great things about Bill; that he was very knowledgeable, personable and caring, and we really hoped that he could pinpoint exactly what was going on.”

“Right from the start Bill was an excellent communicator and so Ella became very comfortable with working with him,” said Anna. “We did many things to my ankle and we started off slow. Each day I looked forward to my PT sessions because I knew they would bring progress,” added Ella.

“Bill was able to break things down so that Ella could understand the intricacies and importance of what he was doing and how it would help her obtain her goal of returning to gymnastics,” said Anna. “In addition to his communication, it was true about what people had said; he was very caring. At one point Bill had said to her, ‘Not everything shows up on an MRI or a scan. That doesn’t mean there isn’t something wrong, or that it can’t be fixed.’”

“Perhaps one of the more impactful things that Bill did was that he gave Ella exercises and stretches that she could do while at her gym,” recalled Anna. “She hadn’t been able to participate since September, and so by being able to go to the gym, be surrounded by her friends and fellow gymnasts, and being able to ‘workout’ was huge for Ella.”

Even though Ella had been completely removed from her sport, both Anna and Ella have said how amazed people are with how far Ella has come and how quickly. “At one point Ella was in a boot and on crutches, and now she is beginning to do her gymnastic skills like the uneven bars and floor tumbling,” said her mother.

While Ella has had some remarkable success with her work at Cioffredi & Associates, Anna has had her own recovery and return to sports. Anna has been a fitness instructor for over 15 years, she is a skier, and has run half-marathons. A little over 5 years ago she started having back pain that progressed to a point that was devastating to her lifestyle.

“I couldn’t do what I loved anymore,” remembered Anna. “I tried many different things including physical therapy, acupuncture, traction, and various medications; anything to avoid having surgery.”
Anna ended up scheduling and then canceling surgery twice before finally having a L4-L5 spinal fusion in June. “In hindsight, I regret not doing physical therapy after surgery,” lamented Anna. “I was feeling so good that it was easy to convince myself that once I worked up to my typical fitness regimen it would be enough to keep me healthy.” However, as she slowly ramped up her activity level, much to Anna’s dismay, her back pain began to creep back. “It was just a little at first, and then eventually it came back to a rather severe level.”

It was right around this point in time that Ella had started to have her ankle pain, and found herself at Cioffredi’s. Once Ella started to see results with Bill, Anna remembers thinking how amazing it was for her. “Bill was so knowledgeable and I thought if he has helped Ella so much in such a short period of time, why am I not trying to receive his help for my back?”

“Since starting to work with Bill, he has become so much more than just my Physical Therapist. Yes, he has helped me physically, but more importantly, mentally. Along the way he became somewhat of a life coach for me. He has held me accountable for my choices, helped teach me to realize when I was pushing myself too much and needed to take a step back, and was interested in all aspects of my life, not just my injury.” ~Anna

At one point, Anna ended up pushing herself too far and injured the patellar tendon in her right knee. “Thankfully, with Bill’s wide range of knowledge he was able to treat my back and my new knee problem without skipping a beat, and he kept pushing me towards my goals,” added Anna. “Every single day there was a new highlight to be found. By holding me accountable, and having the presence that he has, Bill really allowed me to see the small wins, as well as the big steps forward. At one point I couldn’t sit for more than 10 minutes without back pain, and before I knew it I was able to sit in a car for 3 hours to go see my son’s lacrosse game. That is a memory I wouldn’t have had if it wasn’t for Bill.”

When asked how the logistics of having both Ella’s ankle and her own back injury worked, Anna said that again it was all because of Bill. “I still find it amazing how Bill was able to not only manage my two injuries, but also Ella’s. I’m a teacher and a fitness instructor, so leaving my students mid-day or trying to find a substitute for my class for an hour so I could go to physical therapy wasn’t going to happen. Not to mention, I didn’t want to take Ella out of school even if I could get out of class. With my schedule and Ella’s in mind, Bill was so flexible. He made sure that he could fit both Ella and I in, often back-back, in late evening appointments. There is absolutely no way that Ella, or I could have seen him without his availability for us to come as late as 6:00pm or even 6:30pm, especially when coming 3 times a week was necessary. We weren’t just a number, or another person in his schedule. He truly cared and made sure that we got exactly what we needed.”

Currently, Anna’s knee is doing very well and she is proud to report that she is still seeing progress with her back. “It has gotten to a point where I am able to do almost everything my active life entails with modifications only to the duration or intensity that I do it with. I was able to do Lebanon’s Shamrock Shuffle 5k, and I am continuing to teach aerobic and fitness classes daily. This is my passion, and I am happy to be back doing it,” said Anna. “Both Ella and I are very grateful for all that Bill has done for us. Life is too short to live in pain and frustration of not being able to do what you love. Ella will be attending Kimball Union Academy in the fall and it means the world to me that she will be able to participate in sports and activities healthy and pain free.”