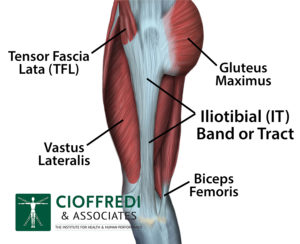 Physical Therapy Treatment Options for Pain and Tightness Along the Thigh

Having pain and tightness along the side of the thigh is quite common, especially for athletes. When the pain encompasses the lower half of the thigh towards the outside area of the knee, it often carries the diagnosis of Iliotibial Band (ITB) Syndrome. For many people it can be persistent or unresponsive to typical treatment. The IT band is a stiff layer of tissue that blends from a broad attachment of muscles from the side and back of the hip. The band becomes narrower as it descends toward the knee where its attachment broadly blends with tissues about the knee cap and into the tibia bone.

The condition is frequently described as the ITB being ‘tight,’ and typical treatment often includes attempts at ‘stretching’ the ITB.  But when you look at the tissue of the band and how it attaches, it becomes difficult to understand how the band itself could get ‘tight’ in the first place. The tissue is relatively rigid and doesn’t have the quality to length or shorten. Then what could possibly have an effect to cause the band to functionally shorten or cause the pain?

In these cases, I see three major components that sometimes get overlooked. First, what does have the tendency to tighten up are the muscles that the band directly attaches to; a relatively small muscle coming off of the front and side of the hip called the tensor fascia lata (TFL), and the large gluteus maximus (the outer part of the major muscle of the buttock). These muscles can be stretched effectively with the following technique, among others. First, standing with the right leg crossed behind the left, then side-bending the trunk to the left (this stretches the TFL of the right leg and ITB). Also, lying on your back and pulling your right knee towards your chest would stretch the Gluteus Maximus. In my experience, however, these stretches are often not successful by themselves.

A second influencing factor for ITB Syndrome are muscles that attach to the pelvis, spine, and thigh that have shortened. The iliopsoas, gluteus minimus, and deep hip rotators such as the piriformis, once shortened, cause the thigh bone to be rotated on the pelvis. Some signs that this condition may exist may be seen in the following: When standing erect, does one foot’s arch appear noticeably flat compared to the other? When lying flat on your back with legs relaxed, does one leg appear turned out noticeably more than the other? While these situations are not the only reason that may cause an arch to be flat or a leg to be turned out, it is a hallmark of a muscle imbalance that I see regularly in clients who have ITB pain. This condition is quite amenable to targeted stretching. It could include stretching the hip flexors (iliopsoas) as seen in a forward lunge stretch or similar modification, and a deep hip rotator stretch or the “pigeon pose” stretch. (See photos.)

Finally, there is a large and significant muscle that runs immediately underneath the IT band, the vastus lateralis. It is the outside muscle of the four quadricep muscles in the front of the thigh. This muscle can get irritated and develop trigger points. A trigger point (TP), is a small band of hypersensitive muscle fibers that, when pressed, can give rise to pain in characteristic patterns, in this case along the ITB, and can involve the outside of the knee. This component can be treated effectively with deep tissue mobilization. 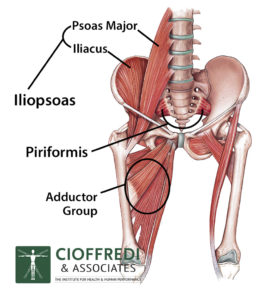 Some people perform their own deep tissue mobilization by rolling the side of their thigh with a foam roller or ‘stick.’ (See photos.) For some, this can be quite effective, but I don’t believe it is ‘rolling out the ITB’ that is being effective; it is the muscle underneath. And sometimes deep tissue rolling and massage are not fully effective and the TP requires deactivation with dry needling.

Check out our VIDEO: “Foam Rolling Techniques for Runners“

Dry needling is a technique used by certified clinicians that uses a very thin, solid filament needle that is placed directly into the TP within the muscle. They are the same needles used in acupuncture, though this is only for the purpose of deactivating the TP. (See photo.) Again, the IT band itself does not have the ability to contract or lengthen to any substantial degree. When these deep tissue techniques or dry needling are effective, I believe it is predominantly due to the effect on the vastus lateralis muscle.

In the case where the pain is only in a small, local spot where the ITB attaches just to the side of the knee, ice can help reduce the pain temporarily. But the source of the problem is usually elsewhere, like the some of the faulty biomechanics described above, and it can include how and where a person might train. For example, the curved elements of a track will increase the strain on the left leg if you are running clockwise. Indoor tracks have tighter turns, and increase loading further if the turns are not banked. Even if you routinely jog on the road, always facing traffic results in an asymmetrical strain on the left and right legs due to the crown design for roads to shed water.

Orthotics, or inserts for shoes that customize the arch for the individual, as well as specialty elastic tape (Kinesiotape or Rock Tape®) can be helpful components for selective individuals. I recommend you consult a professional trained in orthotics or taping application.

Note that while I have described the IT band condition as it presents on only one leg, it is possible that some folks have the pain on both legs, though the same principles apply.

Finally, the challenging part of ‘persistent’ IT Band Syndrome is in knowing how many of these components are contributing to the individual’s condition, and which ones are the predominating factors. The good news is that clinicians well trained in these conditions can help you if needed.

I hope you have found the information helpful.