Triathlete Gains Confidence to Compete at Her Potential 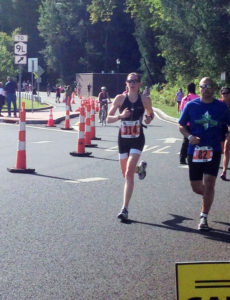 I began training for Olympic distance triathlons in 2011 on a dare. The thought of competing in a three event race seemed appealing because it captured an athlete’s full potential – swim, bike, and run.

The training was hard; waking early to run in the dark before work, filling weekends with endless rides, and the monotony of laps in the pool. Overtime the training got easier and more fun.

A few years later, I found myself looking forward to one big race every year. My partner and I used the training as a productive way to spend time together. So when unanticipated pains or injuries occur, the effects can consume both of our lives.

“Confidence to shine and compete at my potential…”

In 2015 I had started having ankle pain. When ice and ibuprofen served their purpose I was good, however as these interventions became less helpful I started to pull back from my training. As I spent less and less time running, I would try to make it up with CrossFit or swimming. No matter how long I would wait, when I started running again the pain would return; it became chronic and extremely painful. In 2015 I performed well, but suffered terribly. I felt like it was unlikely that I would continue with triathlons.

When my training kicked into gear three months before my big 2016 race, I was prepared for more pain. The first few shorts runs were fine, but the pain lingered. At some point the pain became permanent. At the desk, in the house, at work, and in the car, I couldn’t let go. Never-ending thoughts of stress fractures, crutches, and boots were my nemesis. That is until I decided to seek some help from Cioffredi & Associates.

The pain was persistent, but the treatment, exercises and kinesio tape did their job; I could train hard.

Back to Competing at Full Potential After PT

When injured the only thing we all want to believe in is returning to perform at our highest potential. Well, In August, at Lake George’s annual Big Lake Triathlon Festival I finished in 2nd place among all the women and was 23rd overall, beating my time from the previous year by over a minute and half. Marsha gave me the confidence to shine and working with her allowed me to compete at my full potential.

We promise not to abuse the privilege! We usually send two e-mails per month (no more), full of helpful information and special offers.